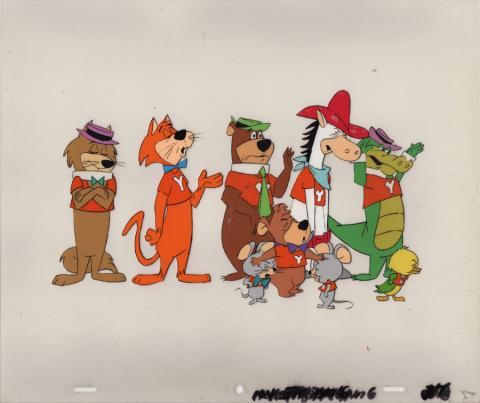 An original production cel from the Hanna Barbera Studios animated series Laff-A-Lympics (1977-1979). Featuring a group of the Yogi Yahooeys including Hokey Wolf, Mr. Jinks, Pixie, Dixie, Boo-Boo, Yogi Bear, Quick Draw McGraw, Wally Gator, and Yakky Doodle, the five layer hand-painted cel setup was created at the studio and used during the animation process. The piece is an actual frame of animation that was photographed and appears in the cartoon as stock footage that would be used repeatedly. Measuring 10.5"x12.5" overall, and with the image area measuring 5.5"x9.5", the production cel is in good condition with minor line wear throughout, paint loss in Qick Draw's hat, and a bit of paint stuck to the front of Yogi's cel.